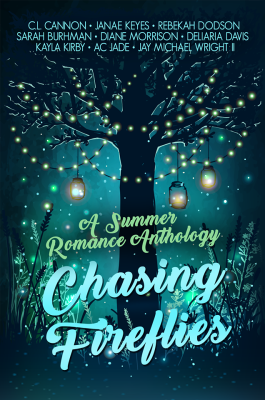 Featuring “The Eye of the Storm,” a story about Shaundar and Y’Anid!

Chasing Fireflies is a collection of 9 summer romance stories from all genres including contemporary, sci-fi, fantasy, and speculative fiction.

From Janae Keyes: It was supposed to be an escape, falling in love was never part of the plan.

From Rebekah Dodson: A respectable woman left behind in war finds fulfillment in a forbidden man.

From Sarah Buhrman: Magic, mystery, and deceit surround a medieval woman’s search for her lost love.

From Diane Morrison: A deep cover Elven soldier discovers that when you learn to think like your enemy, you might also learn to love them.

From Deliaria Davis: In real life, love is complicated and messy, but sometimes you just know it’s meant to be, and this Alaskan teenager intends to prove it, despite the odds.

From A.C Jade: Two strangers discover that a one-night summer affair isn’t all they have in common.

From Jay Michael Wright II: Can a cursed doctor find love with a gorgeous Demon before those hunting her find them out?

From Kayla Kirby: Home before he deploys, David runs into an old friend from high school. David quickly learns that Riley is harboring a dark secret and, in order to attempt to help her, he presents to her a challenge.

From C.L. Cannon: It’s the eleventh hour, and he has to decide. Remain her friend, or take the chance at something more?

Get it here!  Releasing July 1, with print release to follow soon!

You may have noticed that I’m making some changes around here.

In light of long years of trying to get the attention of Wizards of the Coast, to no avail, I have decided to revamp and rebrand the Toy Soldier Saga to scrape out all the Wizards related copyrighted material.  I may seek a publisher, or I may publish it on my own.

Fans of the existing Toy Soldier Saga will need to know that the second and third novels will remain unfinished in the Spelljammer version.  They will be finished, but only in my new universe, and only after the reformatting is completed.  You can still get the first novel in its fan-fiction format here and I’ll be posting it on FanFiction.net as I promised as well.

Here’s a few of the changes that you’re going to see:

Things that will stay the same:

If you have any questions, don’t hesitate to ask!

Changing the Toy Soldier Saga is one of my featured projects at my Patreon this month!  If you want to see this thing come to life, you should support my Patreon. 😉

I have finally figured it out! The Toy Soldier Saga will be a thing!

Some of you may know about my Spelljammer fanfiction the Toy Soldier Saga. For those who don’t, it has a special place in my heart for many reasons.  The first is that I love the Spelljammer D&D campaign setting.  I think it’s an amazing amount of fun!  A few characters that I played in that setting have stuck with me.  One of them gave me part of my Pagan craft (and pen) name.

Another reason is that I have what I think is a really good story that works well in the setting.  I’ve been trying to get someone’s attention at Wizards of the Coast for years, but no luck.  The closest I got is when some friends or fans of Troy Lockwood bitched me out in my comments section because I had inadvertently altered an already altered graphic for inspirational character art, that someone used as their profile…

Should the Fanzine have a Discord?